Source / Courtesy: Review of Religions and Alislam.org.  First published in 2007.

A compelling argument that Thomas Jefferson negated belief in the divinity of Jesus Christ and affirmed the unity of God. Was he influenced by the Holy Qur’an? 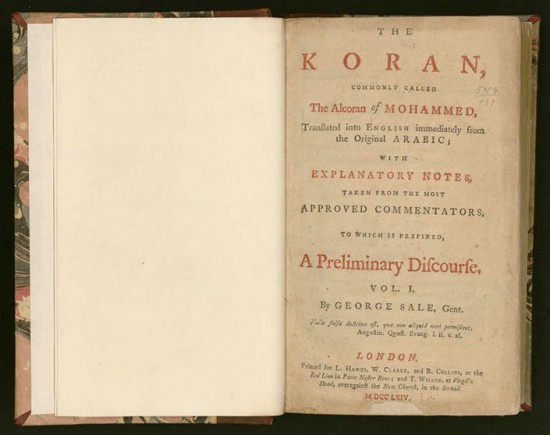 Thomas Jefferson’s copy of the Quran

The adulterated accounts of the Bible did not satisfy Jefferson. After extensive studies of different books Jefferson concluded:

Christianity had traditionally rested not upon reason or experience but upon mystery and miracle. The Bible, moreover, portrayed a deity quite different from that revealed in nature, a deity that reason could neither explain nor defend. How rational could it possibly be for the God of the whole universe to reveal himself solely to one small nation in the eastern Mediterranean and to leave the rest of the world in utter ignorance of his existence? It seemed even more irrational to believe that the Supreme Being of the cosmos had ‘sent his only begotten son,’ who had not offended him, to be sacrificed by men, who had offended him that he might expiate their sins, and satisfy his own anger.

To read the article in April 2007 volume of Review of Religions, on page 44 of PDF file: President Thomas Jefferson

To read a version with several pictures in Alislam.org: Thomas Jefferson