There should be no compulsion in religion. Surely, right has become distinct from wrong; so whosoever refuses to be led by those who transgress, and believes in Allah, has surely grasped a strong handle which knows no breaking. And Allah is All-Hearing, All-Knowing.  (Al Quran 2:256/257) 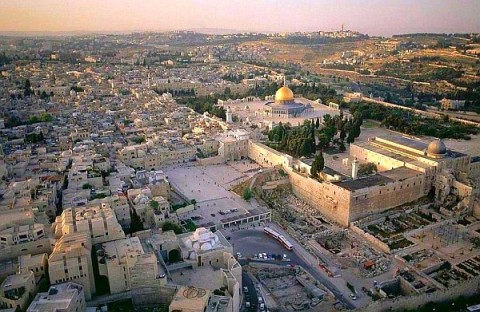 Umar Farooq found the Temple Mount to be a garbage dump for Jerusalem in the 7th century and personally cleaned and restored it!

At the time of advent of Islam there were two Empires, the Roman and the Persian.  The Persian Empire did not survive very long.

So, it may be reasonable to ask, which of the two surviving Empires, the Roman Empire and the nascent Muslim Empire, did the most to give us our vision of the religious freedoms, in the seventh century.

Heraclius and Umar Farooq were contemporaries and each stands for their respective cultures and Empires.

By studying the two, we can track the history of religious freedom in organized human thought during the seventh century.

In this short article I want to show that Islam is a religion of peace and that revelation has contributed in a big way to human knowledge and history.

When the Holy Prophet Muhammad, may peace be on him, claimed Monotheism in the polytheistic society of Mecca they turned against him and he and his followers had to face persecution for 13 long years. He migrated to Medina but the Meccans did not leave him alone there and attacked Medina, it was in these circumstances that the following verses were revealed:

Permission to fight is given to those against whom war is made, because they have been wronged — and Allah indeed has power to help them — Those who have been driven out from their homes unjustly only because they said, ‘Our Lord is Allah’ — And if Allah did not repel some men by means of others, there would surely have been pulled down cloisters and churches and synagogues and mosques. (Al Quran 22:40-41)

By mentioning Churches and Synagogues before Mosques, the revelation was laying the foundation of genuine religious freedom for the whole of humanity.  These verses were revealed around 624 CE and these teachings through the practices of Prophet Muhammad, may peace be on him, in Arabia laid foundation of freedoms that were put into action by Umar Farooq, may Allah be pleased with him, in Jerusalem in 638 CE, when he took control of Jerusalem, after a relatively bloodless siege by the Muslim army. 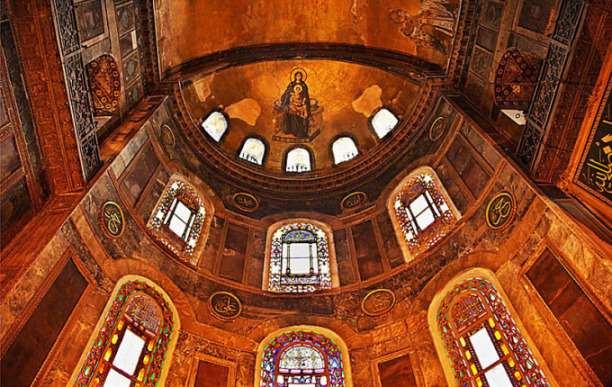 Hagia Sophia: Painting or Fresco of mother Mary and Jesus in the Most Prominent part of the Cathedral, which is now a Museum

I visited Spain with my family during the spring vacation of 2011 CE and went to the central mosque of Cordoba, which was a mosque at least for three centuries, but, it is now a Cathedral. In the year 1492, which is also famous for Columbus having discovered America, not a single Muslim was left alive in Spain, either converted on the point of sword, banished or killed. 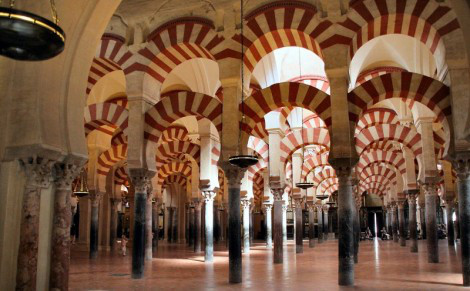 Mosque of Cordoba in Spain

In 2012, we visited Turkey and were very happy to see Hagia Sophia, which is a former Cathedral, later a mosque, and now a museum in Istanbul. From the date of its dedication in 360 CE until 1453 CE, it served as the Greek Patriarchal cathedral of Constantinople. The building was a mosque from 1453 until 1931, after Constantinople fell to the Ottoman.

This is what groups did to the places of worship of others, the so called enemies, in medieval ages!

The holiest shrine in Christianity: The Church of Holy Sepulchre — Caliph Umar preserved it in the seventh century!

But, now I want to share something more dramatic with you. I want you to come with me and visit the holy land of Jerusalem. If you have been to Jerusalem you would have visited the Church of the Holy Sepulcher, one of the Holiest places in Christianity. The site is venerated as where Jesus was put on cross, and is said also to contain the place where Jesus was buried. It did not suffer the fate of the Mosque of Cordoba or the Hagia Sophia, because of the generosity, wisdom and religious tolerance of one man Umar, who was the second Caliph of Islam and a very close associate of the Holy Prophet Muhammad, may peace be on him. Jerusalem was under Muslim rule from 638 until the creation of Israel in 1948, except for a period of 80 years between the First and the Third Crusade.

After a brief and bloodless siege, initiated after the offensives by the Byzantines colonies, Muslims seized control of Jerusalem from the Byzantines in February 638. Caliph Umar Farooq accepted the city’s surrender from Patriarch Sophronius in person. Umar, may Allah be pleased with him, was shown the great Church of the Holy Sepulcher and offered a place to pray in it, but he refused. He knew that if he prayed in the church, it would set a precedent that would lead to the building’s transformation into a mosque. He wanted the Christians to have their freedom of religion and their worship places. Therefore, he instead prayed on the steps outside, where Umar Mosque was built centuries later, allowing the church to remain a Christian holy place.

It would take Europe several centuries to catch up with the ideal set by Umar regarding religious tolerance, based on the revelation of the Quran and the actions of the Prophet Muhammad. In the 8th century Charlemagne, Charles the Great was converting Scandinavians on the point of sword to Christianity and during the First Crusade, in the eleventh century each and every Muslim was killed in Jerusalem, according to the Christian sources, some 70,000 Muslims were killed including 10,000 in the Mosque of Umar itself.

Unlike Umar, how the  Emperor Heraclius saw his role in Christendom and how  he converted Jews to Christianity by force, is outlined here from the  pen of Tom Holland, the author of Rubicon:  The Triumph and Tragedy of the Roman Republic, which won the  Hessell-Tiltman Prize for History and was shortlisted for the Samuel  Johnson Prize.  He writes in his other book, In the shadow of the Sword: The Battle for Global Empire and  the End of the Ancient World:

Clearly, then, urgent as it was to restore to the redeemed provincials the  long-atrophied habits of obedience to Roman rule, more urgent still was the need  to reassure them that the victory won by Heraclius had indeed been a victory won  by God. This was why, in his negotiations with Shahrbaraz, no more urgent demand  had been pressed by the emperor than the return from its ignominious  captivity of the True Cross. On 21 March 630, stripped of all his imperial  regalia and walking humbly on foot, as Christ Himself had done on his way to  Golgotha, Heraclius entered Jerusalem bearing with him the precious relic. Men  reported that the manner of his arrival had been the result of advice given  him by an angel, who had personally instructed him to take off his diadem, and  to dismount from his horse. A supreme honour for Heraclius to receive: orders  direct from the heavens to imitate the last journey of his Saviour.

The restoration of the True Cross to Jerusalem was the  profoundest demonstration imaginable of the great victory that had been  won in the cause of Christ. It also served as a ringing statement of  Heraclius’ intent: never again would he permit the Christian empire to  be pushed by its enemies to the edge of oblivion. On his approach to  Jerusalem, he had made a point of stopping off in Tiberias, where he had been  hosted by a wealthy Jew notorious, under the Persian occu­pation, for  his persecution of the city’s churches. Asked by Heraclius why he had so  mistreated the local Christians, the Jew had answered disingenuously, ‘Why,  because they are the enemies of my faith.” Heraclius, grim-faced, had advised  his host to accept baptism on the spot – which the Jew had prudently done. Two  years later, this order was repeated on a far more universal scale. From  Africa to distant Gaul, leaders across the Christian world received news of a  startling imperial decision: all Jews and Samaritans were to be brought  com­pulsorily to baptism. Heraclius, conscious of how close he had come to  defeat, and of the debt he owed to Christ, was not prepared to take any  second chances. From now on, the Roman Empire would be undilutedly, and  therefore impregnably, Christian.[1]

While Heraclius was baptizing all Jews by force in 632 CE,  Umar Farooq in 638 CE was restoring complete religious freedom to not  only all the Jews in Jerusalem, but, also the Christians.  Would it be a  big stretch to say that Umar Farooq gave the modern world our positive  vision of religious freedom, for every one?

No wonder, if we put Umar and Heraclius side by side and analyze what they represent, we realize that we owe our religious freedoms, in our great country of USA, historically speaking, to the revelation of the Quran: “And if Allah did not repel some men by means of others, there would surely have been pulled down cloisters and churches and synagogues and mosques.”

This verse from the chapter Al Hajj of the Holy Quran, is perhaps the shining foundation of our religious freedom in our Global Village, with its varied religions, creeds and ideologies.

The square minaret of the Mosque of Umar next to the Church of the Holy Sepulcher, very powerfully established Islamic belief in freedom of religion and puts to rest, the accusation, for all periods to come that Islam was spread with sword. Islam was actually the pioneer of religious freedoms as I have demonstrated in many of my articles and posts. For the Muslims the political struggle was always divorced from the freedom of religion.

Umar Farooq and Treaty of Jerusalem